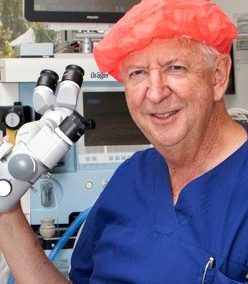 His main research interests are in translational research in otitis media and he has worked on the genetics of otitis media, bacterial biofilm, and the Kalgoorlie Swimming Pool Study with international NIH and NHMRC collaborative research grants particularly for bacterial biofilm in otitis media including a major Grant from the GPRWMF. With the Foundation’s assistance, he developed the first large scale newborn hearing program in WA in 2000. He works annually with WHO and was co-founder of the first Australasian Paediatric ORL society. He was appointed an Officer of the Order of Australia (2005) for his work in ear disease in Aboriginal children as well as receiving other awards including the Fiona Stanley Medal (2001), ASOHNS Humanitarian Award (2014) and the  inaugural RACS Indigenous Health Medal (2015).

His most recent efforts relate to being on the Commonwealth Government’s Hearing Health Sub-Committee producing a Roadmap for Ear and Hearing Health. He has lectured internationally at Harvard, Pittsburgh , Vanderbilt universities and Mayo Clinic as well as at numerous conferences and has over 100 peer reviewed publications.