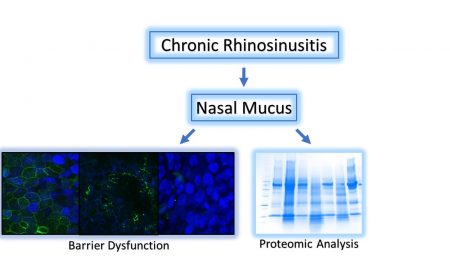 Chronic rhinosinusitis (CRS) is a clinical syndrome characterised by persisting symptomatic mucosal inflammation within the nasal cavity and paranasal sinuses. It has been estimated to be the second most prevalent chronic condition. The pathophysiology of CRS is complex and remains under much debate. Several hypotheses have been proposed to be associated with the aetiology of CRS. Bacteria and fungi have been implicated in the pathogenesis of chronic mucosal inflammation. Additionally, superantigens, biofilms and microbiome hypothesises have been proposed.
Recent studies in our team have demonstrated the strong correlation between P. aeruginosa elastase activity and CT-scan scores of patients with CRS (Li et al, manuscript submitted to Allergy). P. aeruginosa elastase was shown to have a strong negative effect on the mucosal barrier structure and function in vitro. Additionally, elastase activity was found to be increased within the mucus of CRS patients. Certain S. aureus isolates have been identified to have similar effects on barrier dysfunction. Moreover, infection attracts neutrophils that are known to produce elastase. It is hypothesized there are other components within the nasal mucus of CRS patients that cause disruption in mucosal tight junctions leading to chronic mucosal inflammation in these patients.